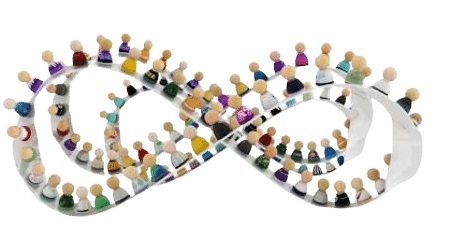 I-ASC relies on its Nonspeaking Leadership Council, and other nonspeaking/minimally/unreliably speaking (together, the “Nonspeaking” and “Nonspeakers”) neurodivergent advocates to guide its mission and advocacy.  In our first blog in the “Step Aside” series, we explored ways to demonstrate that neurodivergent wellbeing is individualized and valid.  In this and future blogs in the series, my colleagues and I hope to share some guiding principles in creating Neurodiversity-friendly, or rather #NeuroInclusive (1) spaces, especially ones that empower Nonspeaking people to make decisions for themselves and optimize their wellbeing. Our first guiding principle in creating NeuroInclusive spaces for Nonspeaking people around us is that MOTOR differences must be considered, respected, accepted, and accommodated!  Neurodiversity-Friendly Spaces Include MOTOR!

Our experts – being actually Nonspeaking people with sensory and motor differences – consistently describe their brain-body disconnect, saying that their bodies are unreliable when it comes to executing planned movement.  It may appear to someone else, or feel to the Nonspeaking individual, that they are often doing something wrong, and can’t conform to able-bodied people’s standards of “appropriateness” in social, educational, or other environments. Nonspeakers tell us that their unreliable and impulsive movements are due to their sensory and neurological differences, not their intent.  If a social, educational, or other event welcomes those individuals with neurological differences, then it must include and accept their sensory and motor differences.

A Conversation on Letterboard Etiquette

I was working with Zach Scheu on the writing prompt and it turned into a conversation between him and Nico. Nico was in the room but working with a different CRP and ended up commenting on what Zach said. The whole conversation happened very organically so I just went with it.  I thought they both made excellent points so I wanted to share. ~Evelyn Moldal, S2C Practitioner Z: When considering etiquette on the letter boards it is crucial to note that kindness is key. A communication partner should be patient and consistent. Spellers need to be able to count on their CRPs for many things, one of the most important being regulation.  N: Zach, my friend, I couldn’t agree more. Respect and regulation…my two favorite ‘R’ words.  N: My first and most important guideline has to be that we keep spelling between individuals who have been trained to work with one another.  Z: 1000% agree. It is so dysregulating when someone lacking training with me drops a board expecting reliable pokes. I work incredibly hard to utilize my form of communication. It simply isn’t fair for someone to hinder my progress with their carelessness.

“Many don’t realize that Possibility actually precedes Opportunity. When...